Back to Orthodox Church
Back to the Main Page 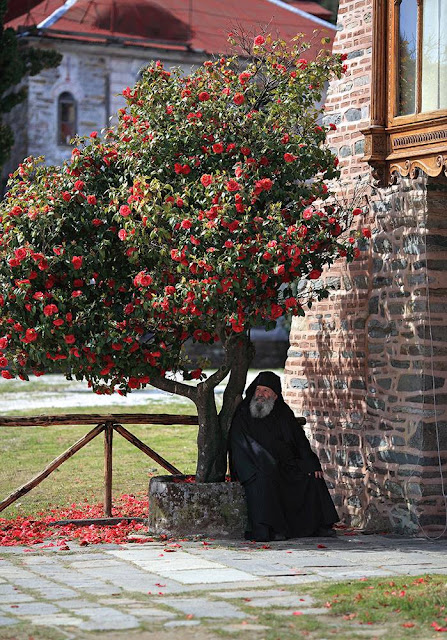 A monk (from Greek: μοναχός, monachos, "single, solitary" and Latin monachus) is a person who practices religious asceticism, living either alone or with any number of other monks. A monk may be a person who decided to dedicate his life to serving all other living beings, or to be an ascetic who voluntarily chooses to leave mainstream society and live his life in prayer and contemplation. The concept is ancient and can be seen in many religions and in philosophy. 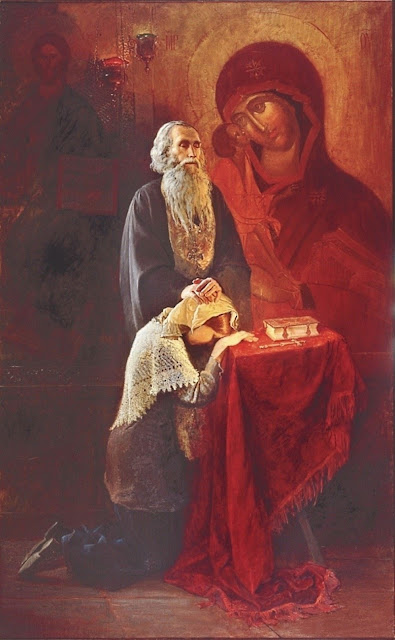 In general, Eastern Catholic and Orthodox Christians choose an individual to trust as his or her spiritual guide. In most cases this is the parish priest, but may be a starets (Elder, a monastic who is well known for his or her advancement in the spiritual life) or any individual, male or female, who has received permission from a bishop to hear confession. This person is often referred to as one's "spiritual father" or "spiritual mother". Once chosen, the individual turns to his spiritual guide for advice on his or her spiritual development, confessing sins, and asking advice. Orthodox Christians tend to confess only to this individual and the closeness created by this bond makes the spiritual guide the most qualified in dealing with the person, so much so that no one can override what a spiritual guide tells his or her charges. What is confessed to one's spiritual guide is protected by the same seal as would be any priest hearing a confession. While one does not have to be a priest to hear confession, only an ordained priest may pronounce the absolution. 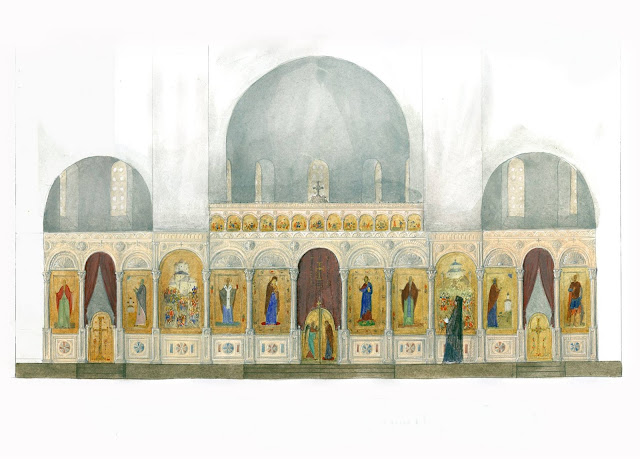 In Eastern Christianity an iconostasis (plural: iconostases) is a wall of icons and religious paintings, separating the nave from the sanctuary in a church. The iconostasis evolved from the Byzantine templon, a process complete by the fifteenth century. 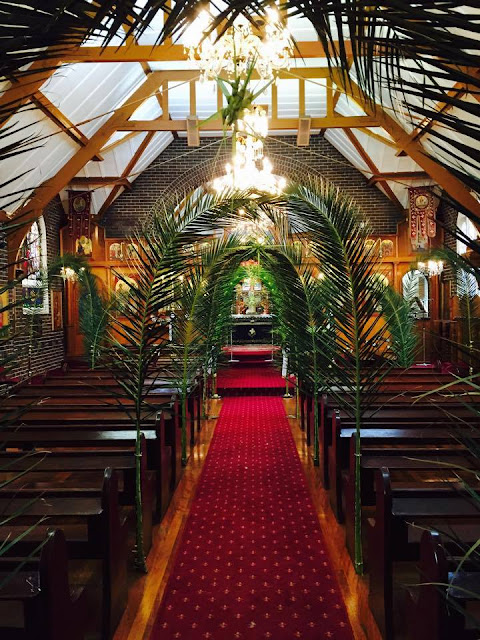 An Orthodox church decorated for celebration of Palm Sunday 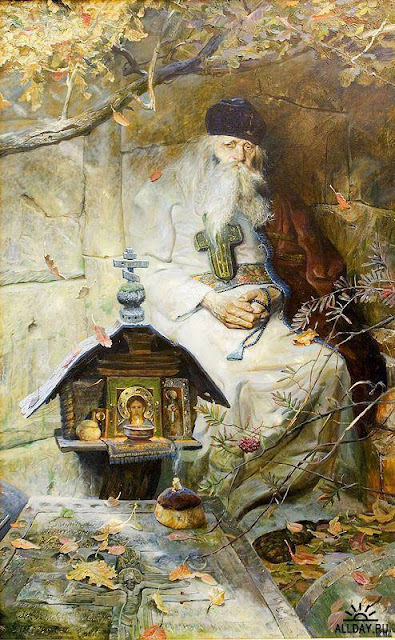 The Greek word Deisis (Δέησις) means “prayer” or “supplication” and it is used for the icon composition representing Christ in Majesty, accompanied by Virgin Mary, the mother of God, and John the Baptist, also known as the Precursor. 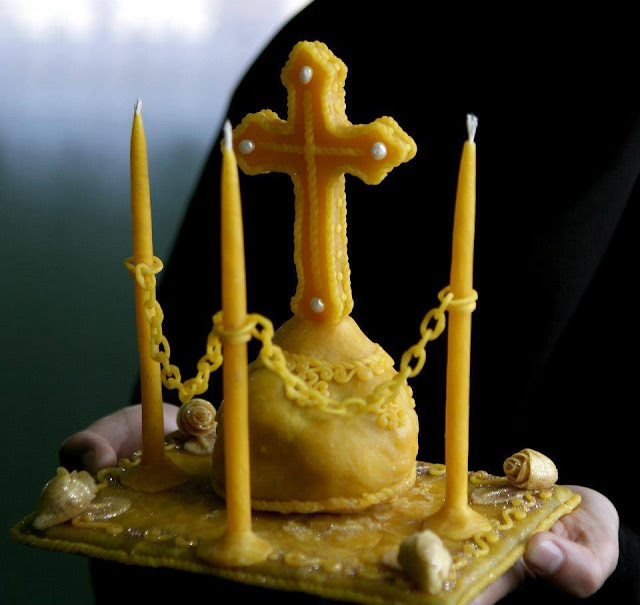 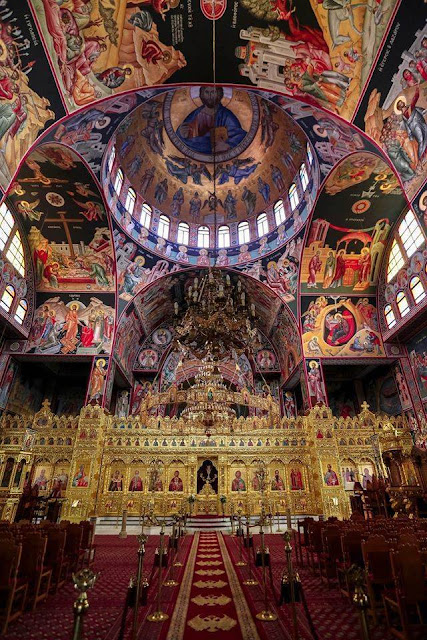 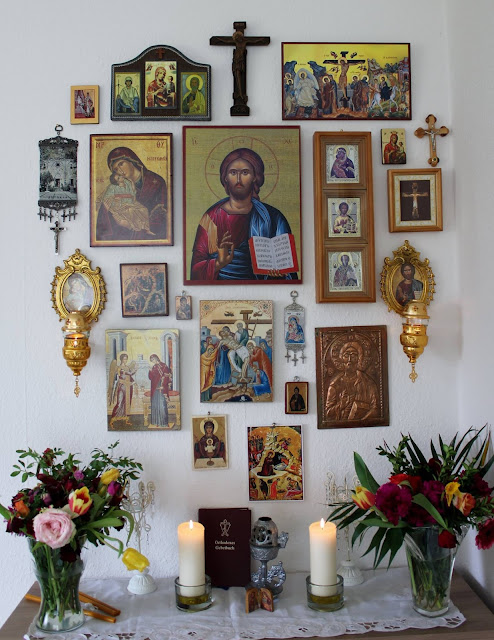 The icon corner is a small worship space prepared in the homes of Eastern Orthodox and Greek-Catholic Christians. The analogous concept in Western Christianity is the home altar. An icon corner is normally oriented to face east. It is often located in a corner to eliminate worldly distractions and allow prayer to be more concentrated. Here is where the icons that the family owns should be located, normally including at least icons of Christ, the Theotokos, and the Patron Saint(s) of the family. An oil lamp normally hangs in front of the icons. The careful trimming of the lamp to keep it burning at all times is interpreted as symbolic of the attentive daily care faithful Christians should take over their souls. 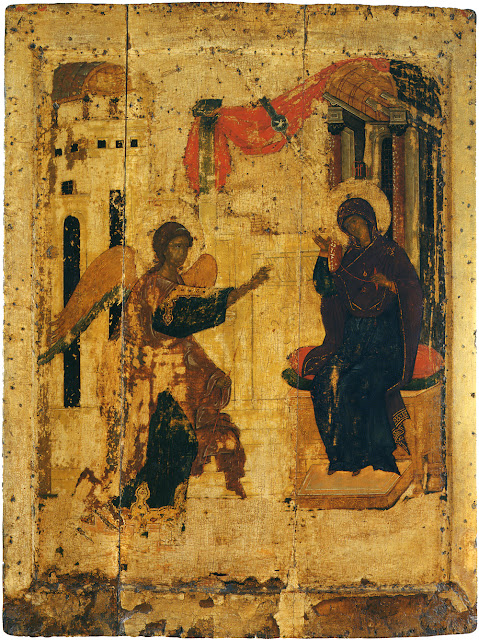 In Greek Orthodox and Eastern Orthodox churches, the Feast of the Annunciation is celebrated on March 25 on the Julian calendar, is one of the twelve "Great Feasts" of the liturgical year, and is among the eight of them that are counted as "feasts of the Lord". In Greek, the Annunciation is known as the "Good Tidings" or "Evangelism" (Euangelismos). The traditional hymn (troparion) for the feast the Annunciation goes back to St Athanasius. It runs:

Today is the beginning of our salvation,
And the revelation of the eternal mystery!
The Son of God becomes the Son of the Virgin
As Gabriel announces the coming of Grace.
Together with him let us cry to the Theotokos:
"Rejoice, O Full of Grace, the Lord is with you!"
Published Bible Illustrated у 12:25:00 PM